From the Tampa Bay Times: As the fading orange sunlight blanketed Demens Landing from the west and a heavy breeze swept over the choppy waters of Tampa Bay to the east, a crowd of hundreds gathered Saturday close to a concrete walkway near the shore. They could already see the names on the aluminum panel that towered over the veiled granite monument.

Amanda Crawford had been to plenty of services like this. Ever since her father, St. Petersburg police Officer David Crawford, was gunned down in 2011, she has attended events to honor fallen officers in Washington, D.C., Tallahassee and elsewhere.

Each one is difficult, she says, like reliving her father’s funeral. But she still goes, she says, because it’s important to remember.

On Saturday, community leaders, police officers and citizens spoke about Crawford and 14 other St. Petersburg police officers, vowing never to forget their names or the sacrifice they made. A quartet of helicopters flew over the crowd as a veil was lifted from the 7-foot-tall slab of black granite bearing the silhouette of an officer — the first official memorial honoring St. Petersburg’s fallen officers.

Read the Program from the Dedication: FINALProgram 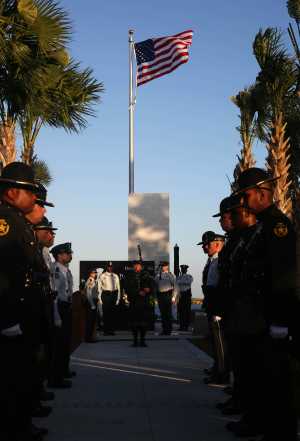